Question: What is a full frame digital SLR?

A full frame digital SLR camera is one that has a sensor that is the same size as a single frame of 35mm film.

The vast majority of existing digital SLR cameras have sensors that are smaller than film: this results in something called crop factor (also called focal length multiplier).

Essentially, when you use a lens that was originally designed for a film SLR camera on a digital SLR, the reduced sensor is capturing a cropped view of the image passing through the lens. This results in an artificial "zoom" effect which enhances the telephoto properties of the lens attached to the camera.

Along with the reduced need for mental gymnastics every time you attach a lens to your camera, full frame SLRs come with another benefit: improved image quality.

Full frame cameras are able to achieve better image quality because the digital sensor is physically larger than it is in most other standard digital SLR cameras.

Sensors are made up of tiny light-gathering elements called pixels. Let's say you're comparing two digital SLR cameras with 10 megapixel sensors: one is full frame and one is not. For the camera with the cropped frame, the same number of pixels must be crammed onto a sensor with less surface area. The end result: smaller pixels that generate more image noise every time you take a picture.

Almost non-existent a year ago, full frame digital SLR cameras are now starting to pop up with greater frequency: three introduced this year include the Nikon D700, Sony A900 and the Canon 5D Mark II.

For now, these SLRs with large sensors are exceptionally expensive relative to their reduced-frame alternatives and their features place them into professional photographer territory.

But as more film SLR photographers make the transition to digital in the years to come (and want to leverage their collection of film lenses without having to do a lot of math), expect to see many more full frame digital SLRs with reduced prices geared for amateur enthusiasts.

This month the digital SLR cheat sheet will tackle a tough photographic issue: how to capture action in dim light.

The reason that this is a tough photographic issue is because you are fighting against your camera's natural tendency.

When there's not a lot of available light, the first option many an SLR will choose (when left to its own devices) is to slow down the shutter speed.

Past issues of this newsletter have delved into the result of slow shutter speeds: image blur.

There are two types of image blur that result from the use of slow shutter speeds: blur caused by a fast-moving subject and blur caused by the motion of the camera in your hands.

In this case, we're trying to prevent the former and the ONLY way to do this is to use a FAST shutter speed (that fancy image-stabilized camera or lens isn't going to be a bit of help in this scenario).

The trick: you're going to have to squeeze every last ounce of shutter speed out of your camera that the lighting will allow.

SETTING #1 The first setting to adjust is the camera's aperture: open that lens up as wide as it will go so that it's letting plenty of light through to the sensor.

Note: a SMALL aperture number indicates a WIDE opening of the lens.

SETTING #2 The second setting to fiddle with is the ISO: an increase in ISO makes the sensor absorb light faster which means that it requires less time to absorb the same amount of light. Net result: faster shutter speeds.

EXAMPLE For this photo of my dog leaping off the wall in our backyard, I knew that I'd need to use a shutter speed around 1/1000th of a second to freeze him in midair. 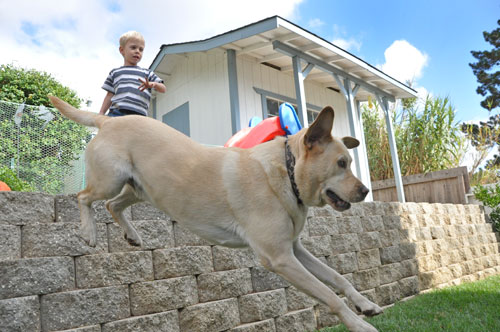 Get the Most From Your Digital SLR Camera

What Do You Need?

Here's a fun one (and a question I NEVER thought would come up with digital SLRs): Do you need your SLR to capture both stills and video?

For a long time, the digital SLR camera was the domain of the photo purist: they took pictures and that was that.

If you wanted to grab some frames of video you could either use a compact digital camera or - for better quality - you could purchase a dedicated video camera.

Well, the times they are a changin'.

The release of the new Nikon D90 took the old assumptions about what a digital SLR camera was good for and threw them out the door. Simply put: the Nikon D90 is the first digital SLR that captures both photos and videos.

If you thought that was the end of it, you'd be wrong. Hot on the heels of the arrival of the D90 comes the new Canon 5D Mark II: another camera that captures stills and video.

And this isn't your compact digital/straight to YouTube video either: the D90 can capture video in both standard format as well as High Definition widescreen (also called 720p) for display on modern flat-panel television sets. The Canon 5D Mark II takes this a step further, capturing High Def video at 1080p.

It all sounds good on the spec sheets, but is it really necessary?

I say this so much I should put in on a T-shirt: a lot depends on what you want to photograph.

For example, the die-hard landscape photographer won't get a ton of use out of the video features available on these cameras. For portrait and family photographers (like myself) it's quite wonderful.

I have lost count of the number of times during a photo session with my kids when I've wished I had a video camera instead of an SLR. They are those times when video is worth a thousand pictures, where the audio and motion that goes with the scene is so much more important than a single still frame.

If you want to be able to switch back and forth between the two formats without having to have multiple cameras hanging from your shoulders, then a digital SLR that also captures video might be just what you need.

The following collection of links will help to keep you posted about what's new at the Guide and in the world of digital SLR cameras.

My apologies for the delay in getting this newsletter out - September was just one of those months.

I just HAD to get my hands on the new D90 so that I could write up a guide for it and that has been consuming a lot of time. When you throw in a bout of illness plus a slew of new cameras recently announced, the month just slithered away from me.

All this means is that you won't have to wait so long until the next digital SLR newsletter.