Before I get into ISO, I need to talk about different sensor sizes. 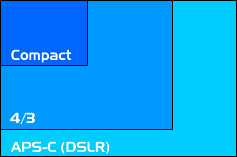 Many digital SLRs include a sensor that measures about 23 x 15mm, which is also called an APS-C sensor. Olympus and Panasonic are a bit different: their sensors measure 18 x 13.5mm, which is called Four Thirds.

Now, a sensor that measures 23 x 15mm may not seem all that large, until you compare it to the size of a typical compact sensor: 8.8 x 6.6mm.

Sensors are made up of individual light-gathering elements called photosites.

A quick review: the ISO setting on your camera determines how fast the sensor absorbs light.

Fiddling around with the ISO setting lets you take clearer photos when there isn't a lot of avalable light.

Let's take a concrete example: you're trying to take photos of your child playing a fast-moving sport either inside a building with dim overhead light or outdoors in the late evening. In either location, you don't have a lot of available light.

With your camera set to ISO 100, you try taking a few shots. Given the limited amount of light, your camera's shutter speed is a slow 1/60th of a second. That's fine if you're trying to take a snap of a non-moving flower, but won't do for your sports shots: EVERY photo you take of your kid will be blurry.

You increase your ISO to 1600 or even 3200 to boost your shutter speed. Once the shutter speed is fast enough, the motion blur in your photos disappears. However, this ability to instantly increase shutter speed comes with a drawback: more noise.

"Noise" or "grain" is a reduction in image quality when you use high ISO settings. At low ISO values, your pictures will look smooth and crisp. But at high ISO settings, you'll see a LOT of speckling in the photo.

Now....what if you could use absurdly high ISO settings without having to worry at all about the loss of image quality?

It's possible that the next generation of digital SLR cameras will be able to do just that. 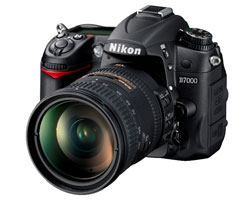 One innovation in the new DSLRs of 2010 is their ability to leverage extremely high ISO values....ones that were never possible with film. For example, the new Nikon D7000 can use an ISO value of 25600.

An ISO value this high is ONLY possible because of the larger APS-C sensor. If manufacturers tried to add ISO 25600 to a compact camera with its tiny sensor (and relatively tiny photosites) the resulting images would be a grainy mess.

While you will certainly be able to see the grain in photos taken at ISO 25600, the noise-reduction programs included in current digital SLRs do a great job of keeping noise to a minimum.

What does all this mean for the average amateur photographer?

It means that sometime soon, you'll be able to take photos of moving subjects under ANY type of available light and both image blur and image noise will be non-issues.

While the real benefit of this technological advancement is for people who want to snap pictures of race cars at twilight, the reduced noise at ALL ISO values simply means that your pictures will look better. 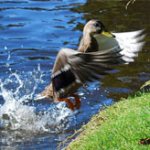 Like it or not, HD video in digital SLR cameras is here to stay. In fact, it just keeps getting better.

The number tells you the dimensions of the video image:

The letter tells you whether the video is interlaced (i) or progressive (p). Interlaced video was the standard for a long time with tube televisions and uses TWO separate scans (odd and even) to create one frame of video.

Watching an interlaced video you cannot actually see the odd and even scans, because the persistence of visions blends the two together.

However, sometimes with video of very fast-moving subjects you can see a slight blur of the image (also called "ghosting"). 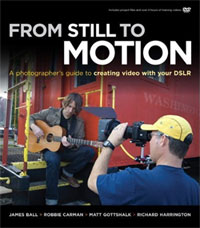 Progressive video just displays one full frame at a time, and it's how LCD computer monitors and High Definition TVs (HDTVs) display video.

The first generation digital SLR cameras with a video capture feature were all 720p (at 720, the ONLY type of image scanning is progressive). 720p is also sometimes called "High Definition" video.

By contrast, the cameras of today capture 1080p - also called "FULL High Definition" - which should be hard to tell apart from video captured by professional television cameras.

Much like megapixels, there's a race here, but the race is pretty much over: for now, there is no format that is higher quality than 1080p.

The real innovations in digital SLR video capture lie in the area of autofocus.

In addition to "just" capturing 720p video, the original DSLRs with a movie mode could NOT use autofocus during video capture. If you wanted to shoot video, you had to get really familiar with your manual focus.

The digital SLR cameras of 2010 do not have this limitation, but there still are improvements to be made.

Contrast detection autofocus is SIGNIFICANTLY slower than phase detection. Coincidentally, it's also the type of AF that digital SLRs use when you switch them over to video mode.

This means that you CAN use autofocus when taking video with a DSLR, but it won't be nearly as fast nor as accurate as when you use the AF to take still images.

The reason that a DSLR has to use contrast AF during video capture is because the mirror - the thing responsible for reflecting the image the lens sees up to the viewfinder - needs to move out of the way so the camera's sensor can capture a moving image.

When the mirror moves out of the way, it also BLOCKS the camera's phase-detection autofocus system. 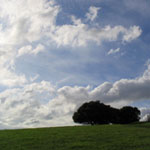 Learn all about light in this new series of lessons from the Digital SLR Guide. These lessons explain:
Learn More

From Mirrors to Mirrorless

One way to speed up autofocus during video capture is just to get rid of that pesky mirror altogether. This is the choice manufacturers have made when creating their mirrorless DSLR cameras.

The advantage here is a faster autofocus and the downside is that you lose the optical viewfinder. 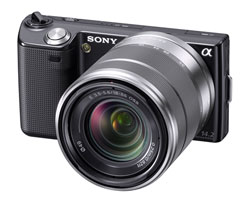 If you've spent years looking though the optical viewfinder of an SLR to compose your photos, then this is a significant change — taking pictures using only the LCD is not an easy adjustment.

But if you're just stepping up from a compact camera - where there is NO viewfinder at all - then you're not going to miss it all that much. Composing pictures with the LCD screen should be second nature.

Now, here's a twist: what if you could have BOTH faster autofocus for videos AND a viewfinder?

That's just what Sony has done with their new line of SLT cameras.

The Sony SLT-A33 and SLT-A55 include a SEMI-TRANSPARENT mirror. This new type of mirror reflects some light up to the phase detection autofocus system and it lets some light pass through so the camera can capture video.

It also results in another interesting side-effect: MUCH faster continuous shot speeds.

While a typical DSLR can capture photos between 3 to 5 photos per second, the Sony SLT-A55 can capture consecutive images at a whopping 10 per second. In some sense, it's the still image equivalent of capturing video.

A New Breed of Camera

SLT cameras - and any that follow in their footsteps - can no longer be classified as SLRs.

The letters SLR stand for "Single Lens Reflex" and in order to qualify as an SLR, the camera MUST have an optical viewfinder. An electronic one doesn't count. 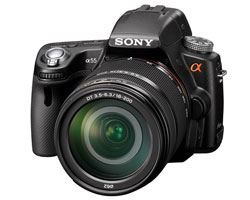 So while the SLT cameras solve some of the problems that "true" DSLRs with video have run into, they can't technically be called SLRs.

Sony has effectively introduced a new TYPE of camera, one that is neither a compact nor an SLR. It's a blending of features from each one: the speed, high image quality, low ISO noise and larger sensor size of a DSLR combined with the electronic viewfinder (or no viewfinder at all) that's common on compact cameras.

In the future, I expect the line between "compact" and "SLR" cameras will become quite blurry.

We're already heading down that path: mirrorless digital SLRs share all the features of their DSLR cousins, they just don't have that optical viewfinder. Mirrorless DSLRs are really just compact cameras with APS-C sensors and multiple lens options.

Sony's SLT cameras are DSLRs in size, shape and features, but replace the optical viewfinder with an electronic one. Their main advantage over mirrorless cameras is SPEED: both the autofocus and continous shot speeds are faster.

Here's the good news: regardless of where all this technology goes, the Digital SLR Guide - and this newsletter - will continue to provide information to help you sift through all the features to find the best camera for you.

As part of the update to the Digital SLR Guide, I've added all the recently announced new cameras of 2010 to the pages for Canon, Nikon, Olympus, Pentax and Sony.

I have also updated the popular Canon vs. Nikon page with the latest and greatest cameras from each company.

More page updates will be made over the next couple of months to help ensure that the information on the site is fully up-to-date before the holidays.