This month, I'd like to tackle a fairly tricky question: how long should you wait (if you have been waiting) to buy a new digital SLR?

Are the current crop good enough, or is there something right around the bend that will make all the SLRs of 2008 feel obsolete?

I started the Digital SLR Guide in late 2005 and didn't get around to using a variety of cameras until 2006. I can safely say that even back then, digital SLR cameras were quite capable (in the right hands) of capturing extraordinary images.

Early on, the only way the cameras could really differentiate themselves was by their megapixel count, since all other features were pretty much equivalent.

The digital SLR megapixel race was on, but eventually it did reach a plateau: 10 megapixels. Today, 10 megapixel digital SLRs are by far the most common, but by the end of this year that could easily shift to 12 or more.

After the megapixel race settled down, manufacturers had to look for other angles to entice photographers with their cameras.

Olympus came up with two: a dust-cleaning sensor (since dust can contaminate the digital sensor when you change lenses) and a live view LCD. Not surprisingly, both of these useful features are now quite common on all new cameras.

However, buyer beware. If you're considering an older model digital SLR (for the sake of your budget) just be aware that it may not have these more "modern" features.

In addition to dust control and live view, modern digital SLRs have made huge leaps forward in their ability to capture high-quality images in dim light. For a certain type of photographer - one who constantly takes pictures in low light without flash - this alone is a valid reason to buy the latest and greatest.

The issue here is that older digital SLRs produce a LOT more noise at high ISO settings - which means that any setting above 400 is going to create fuzzy-looking photos.

With modern cameras, you can fire away at ISO 6400 and be hard-pressed to see the noise in your images, even when you inspect the photo at full size on a monitor.

But what does the future hold?

Well, if you really want to capture video with your digital SLR then WAIT. Only two cameras currently have a video mode, but if the buzz generated by this feature is any indication it will soon be available on many new cameras.

Articulated LCD screens (ones that flip out from the camera body) might also become more common, since this is SO helpful when using the live view mode.

Speaking of live view, expect to see some real improvements in the performance of live view systems. The current crop of live view LCDs allow you to preview an image before you take it, but autofocus is quite slow, and there's a noticeable delay when taking a photo.

As such, live view is really only good for non-moving subjects - for all others you'll have to use the camera's viewfinder. Expect future versions of live view to perform significantly faster.

I'd like to kick off the new year with one of the more confusing components of any digital SLR camera: aperture.

Aperture is a measurement of the opening in the lens. This opening allows light to pass through the lens - that light eventually strikes the digital sensor, which then captures an image.

The aperture of a lens is never completely closed: it is always either narrow or wide open. Furthermore, aperture is a variable setting that can be adjusted by the photographer.

Back in the good old days of manual film SLR cameras, aperture was always set by turning a ring on the lens (right where it attached to the camera). Today, this mechanical system has been replaced with an electronic one.

Many modern digital SLR lenses no longer include an aperture ring. This is because with a digital SLR, you set the aperture using the camera body: electronic contacts allow the camera to communicate with the lens so when you select an aperture on the camera, it adjusts the lens aperture accordingly.

If you do happen to have an older film lens that is compatible with your digital SLR, you will have to lock the aperture ring on the lens (this is often done by turning the ring to the narrowest lens aperture). Once the aperture ring is locked, then the camera will be able to communicate properly with the lens.

Now for the fun part: the aperture numbers themselves.

Part of the fun is that in order for them to make sense, you have to think of aperture numbers as fractions, even though they aren't displayed that way.

Here's why: the larger the aperture number, the smaller the opening in the lens.

Aperture numbers follow a pretty typical scale, and you can always tell when an aperture number is being referenced because it starts with "f/". The aperture scale goes something like this:

From left to right, the opening in the lens is getting progressively smaller. An aperture of f/2.8 means the lens is wide open, while at f/22 it is quite narrow.

This is why thinking about apertures as fractional numbers might help (unless you're really bad with fractions). For example, if you compared the fractions 1/4 and 1/22, 1/4 is the larger of the two and therefor represents a larger opening of the lens.

This is enough aperture numerology for one month. Next month I'll tackle the issue of stops of light, and will describe how the standard aperture scale can be broken down further.

LESSONS: Get the Most From Your Digital SLR Camera

For all you folks who've been reading these newsletters for some time now - this section is for you!

My sincere hope is that by now you're well past the point where you need me to explain things like aperture, shutter speed, ISO and white balance (but if you need a refresher then just read the section above).

The tutorials that appear in this section of the newsletter will take the topic that I describe in the Beginner Tutorial and will flush it out further with details for more advanced photographers.

To kick it off, I'd like to talk about the impact that the aperture setting can have on your images: it allows you to control the depth of field.

Unlike your eyes, which are always pretty much focused on everything from the immediate foreground to the distant background, digital SLR cameras have selective focus: they're only able to maintain focus in one area at a time.

Everything within the plane of focus will appear nice and sharp.

However, subjects that are either IN FRONT OF or BEHIND the plane of focus will not necessarily also be in focus - this is due to depth of field.

There are three different variables that affect the amount of depth of field that is apparent in your photos:

I'll tackle the impact of focal length and distance from subject in the next newsletter - for this one, we're only going to focus on how lens aperture affects depth of field.

Let's work through an example. In both of the shots that follow, the ONLY variable changing is the aperture of the lens. The focal length of the lens is a constant (70mm) and the distance from the subject is also a constant (about 5 feet or 1.5 meters). 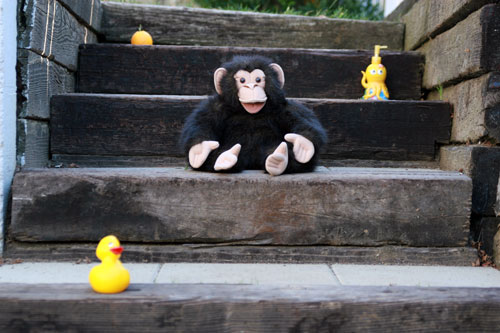 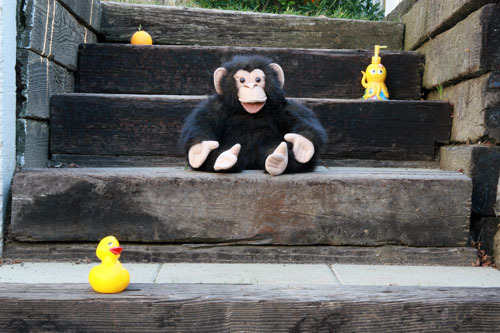 In both images, the plane of focus is set on the stuffed monkey (one of the few subjects in my house that isn't in constant motion).

In the first image, notice how objects in front of the plane of focus (the duck) and behind it (the soap dispenser and orange) don't appear in focus. This is due to the shallow depth of field at aperture f/3.5.

In the second image, everything from foreground to background is sharp, thanks to deep depth of field at aperture f/22.

But why does it matter that aperture controls depth of field?

Glad you asked - every camera control has a real-world use, otherwise it wouldn't make sense for manufacturers to keep churning out cameras with all these features included.

Now that you know that the lens aperture can be used to control depth of field, you can apply this creatively in your images to either give every part of the image equal weight or to single out a specific item as the focal point.

Imagine that you're snapping an image of a beautiful flower in the countryside. You have two ways to take this picture (assuming that the plane of focus in both is set to the flower):

The most common use of wide aperture/shallow depth of field is for portrait work since you don't want either foreground or background to compete with your portrait subject. Narrow aperture/deep depth of field is often used for landscape photography, where you want everything in the image sharp for maximum impact.

I have caught one cold after the other in the month of January, but finally seem to be on the mend.

At least I was able to work on this newsletter at different intervals when I actually felt well enough to do so.

I hope that you're reading this newsletter in good health, and that you are able to get outside with your digital SLR camera and experiment a bit with some of the information that you've learned from this newsletter.

Next month, we'll get into more detail about aperture and I'll provide some more information about the digital SLR camera models that are rumored for 2009.