What is Maximum Aperture?

The maximum aperture of the lens you use can limit the types of photos you are able to take with your digital SLR camera.

Not all lenses are created equal: some can open up much wider than others and the ones that open up wider can let a lot more light through onto the sensor.

Since light is the foundation of every photographic image, the more that the lens lets through, the more flexibility you have to take pictures in all kinds of available light - from bright sunlight to dim twilight.

Aha! you say. I should just run out and get a lens with a super-wide opening and then I can take pictures whenever and wherever I like!

Unfortunately there's a cost issue here: the wider a lens opens, the more it costs. And the price difference isn't minor. It's possible to spend several hundred more on a lens with a wider opening.

So you want to be sure before you dip into your wallet that you really NEED that wide opening and that you'll leverage it often.

So let's talk more about maximum aperture and how it differs from lens to lens. However, before we can do that we have to start by talking about plain old aperture.

Aperture (AKA The Hole in Your Lens)

Imagine that you're standing inside a dark room with a circular window. There's a crank inside the room that lets you adjust the size of the window to let in more or less light.

If you crank the window wide open tons of light spills into the room, and if you narrow it down then only a small beam gets in.

The aperture of your lens works exactly the same way: it's a circular opening in the lens, and you have control over the size of the opening.

There is a standard scale for aperture numbers, and it looks like this:

This scale has completely confused many beginning photographers. That's because the numbers are the inverse of what you'd expect:

Here's a graphic that shows the relationship between the opening of the lens and the aperture number:

See? As the numbers get bigger, the opening gets smaller.

It's important to really understand this inverse relationship before you tackle maximum aperture.

All lens apertures can be narrowed as much as you want. For example, every lens on the market today - regardless of manufacturer - can be set to f/16.

The reverse is not true - every lens on the market CANNOT be opened up to f/1.4.

The limit to how wide a lens can be opened is called the maximum aperture.

Bottom line: a lens with a wider maximum aperture lets in more light.

What are the benefits of lenses with wide maximum apertures? There are a three. 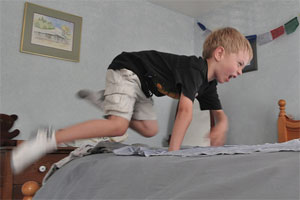 There are two ways that it can get the light that it needs: it can keep the shutter open for a long period of time or open the aperture as wide as possible.

Let's say that you hate taking photos with flash, because you know how washed out they look.

You're indoors and your camera tells you that with your aperture set to f/4, your shutter speed will have to be 1/30 of a second. That's not going to be fast enough to take a shot of your child rampaging in the living room.

You're going to have to use the flash, or get the kid to sit VERY still.

If you had a lens with a maximum aperture of f/2.8 (which lets in double the amount of light of f/4) then you can use a shutter speed of 1/90, which means that you can get clear photos without the flash. You're taking photos on an overcast day of a flower in the backyard. A strong breeze is blowing, and that flower is moving all over the place.

You set the aperture on your lens as wide as it can go (let's say f/5.6), and check the shutter speed. The camera tells you that you can use a shutter speed of 1/125 of a second.

That's not fast enough to get a clear photo of the flower. You're stuck.

If you had a lens with a wider maximum aperture you could get the shot. With a wider aperture (say f/2.8) your shutter speed could be 1/500 of a second.

Since the wide aperture lets in so much light, the shutter doesn't have to stay open as long. 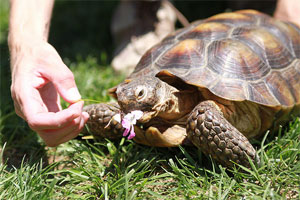 Lenses with wide maximum apertures have shallow depth of field.

Without getting into a discussion on depth of field (that could take awhile), I will just refer to the photographic example at right.

This shot was taken with a lens set to f/3.2. Notice that the background is completely out of focus even though the turtle's head in the foreground is clear?

This is shallow depth of field.

Nature and portrait photographers use this all the time to reduce the impact of a busy background.

If you have a lens with a maximum aperture of f/5.6, you can't reduce the depth of field as much as you can with a wider aperture.

How to Tell the Maximum Aperture of a Lens

If you've been comparison shopping for lenses, you've probably had to wade through a whole lot of numbers.

But it's the second set of numbers we're most interested in right now: these indicate the maximum aperture of the lens. Remember, there's really no point in marking the MINIMUM aperture on the lens, because that's pretty much the same for all lenses.

Wait one second though...in some of these examples there are two numbers instead of one - what's up with that?

The maximum aperture of a prime lens is straightforward: there's only one.

But with some zoom lenses, there can be TWO maximum apertures.

Example: you've got a standard kit lens that came with your digital camera and it's an 18-55mm f/3.5-5.6 zoom. The reason that there are two numbers is because your zoom lens has a variable maximum aperture:

Zoom lenses like this are a real problem for professional photographers who control their cameras manually. This is because with a variable max aperture zoom, exposure settings constantly change as you zoom in and out.

The good news: there are plenty of zoom lenses with constant maximum apertures.

The answer is simple: if you see a zoom lens with only ONE aperture number then it has a constant maximum aperture.

So What Max Aperture Do You Need?

The answer to this question depends a lot on where and when you want to take photos.

If you have a knack for pulling out your camera in the dimmest lighting conditions, then you're going to need a lens with an extremely wide maximum aperture.

If - on the other hand - you only take photos in broad daylight, then a wide maximum aperture isn't as crucial.

Zoom lenses with constant maximum apertures are a HUGE benefit to photographers who want to take more manual control over their SLRs, but not as useful tho those who keep their cameras in AUTO mode.

The following quick chart should give you a ballpark sense of the maximum aperture that's best for the lighting conditions:

If your photos succeed or fail based on having a fast shutter speed (so that they don't all turn out blurry) then you're going to want to find a lens with a nice wide max aperture to help you get blazing-fast shutter speeds regardless of the amount of natural light.

In Step 1, I introduced you to Chris, who's looking for a good lens to photograph his son's little league games.

Chris is building his digital SLR lens wish list one feature at a time.

He has already decided that he wants a telephoto zoom lens that he can attach to his Nikon digital SLR camera.

Chris is getting closer to identifying his ideal lens. Just a few more steps to go...