If nothing else, PMA often makes it clear where digital camera technology is headed.

Whether it's the release of new cameras, or the announcements of prototypes and concept models, if you look at the overall trends you start to see a bigger picture of what technology might be coming next.

I'll break down what each company announced for the PMA show, and what this might mean for those interested in DSLR cameras in 2010.

Canon announced the arrival of their next Digital Rebel: the T2i 550D.

Besides this, the T2i replicates all of the T1i's other features, but it ups the megapixel count from 15 to 18.

This camera clearly shows that Canon has fully embraced the digital-SLR-as-video-camera mentality, and wants to continue to improve upon this feature. Expect the release of more hybrid still/video cameras from Canon in 2010.

Less eager to jump on the DSLR video bandwagon (although the first company to produce a DSLR that could capture video - the D90) Nikon spent a lot of time in 2009 focusing on high ISO image quality.

It appears that this will continue to be the trend for 2010, and if Nikon can continue to minimize noise at high ISO settings they will have a camera that can pretty much take clear pictures in the dark.

This is not to say that video is off the table - you can expect Nikon to release some new cameras in 2010 with the ability to capture video.

Olympus also announced a camera prior to PMA: the Olympus E-PL1.

The E-PL1 is another Micro 4/3rds camera, also called an interchangeable lens digital camera (ILDC) or a mirrorless DSLR (micro 4/3rds cameras don't include a viewfinder and mirror system like "true" DSLRs).

And even though Olympus appears to have completely forgotten about their DSLR line (in favor of the Micro 4/3rds format) this is not the case - expect to see some new "true" DSLRs from Olympus this year.

There hasn't been a lot of news from Pentax lately, so my guess is as good as yours about what they are going to release in 2010.

Video will most likely be included, since it found its way into the K-7 and the K-x of 2009.

One thing I can guess: Pentax cameras offer great value for money since they have to compete with a lot of other significantly larger players in the DSLR market.

I expect Pentax will continue to offer competitive cameras at lower prices, providing consumers with a lot of features for their hard-earned currency.

For a long time, Samsung was cranking out Pentax clones that differed very little from alternative Pentax models except for brand name.

Now Samsung is going in a different direction, focusing their attention on the mirrorless DSLR market.

With the recent announcement of the Samsung NX10, it appears that Samsung has seen the opportunity in this new market and is preparing to offer cameras that appeal people who want better image quality but aren't happy with the size and bulk of digital SLRs.

Sony was by far the most vocal manufacturer at the show, but had no specific cameras to announce nor any release dates.

Some concept models shown make it clear that Sony intends to challenge Panasonic and Olympus in the micro 4/3rds market with their own compact interchangeable lens digital cameras (ILDCs).

Sony also appears to be embracing video capture and will probably release some DSLRs in 2010 that include this feature (which was notably absent from all of their 2009 models).

Finally, some high-end lens announcements show that Sony would also like professional photographers to embrace their cameras. This is a very tough sell, since so many pro shooters have been faithfully using Canon or Nikon cameras for years.

Due to overwhelming consensus from fans of the Digital SLR Guide's Facebook page, this month I'll be talking about something that appears to be an issue for many: how to photograph moving subjects in low light.

Let's cover the important point first: it all comes down to shutter speed.

If your shutter speed is too slow when you're taking photos of moving subjects, you wind up with a very blurry subject. When taking pictures of active subjects in dim light your one and only goal is to INCREASE your shutter speed as much as possible.

There are two ways to maximize shutter speed:

The lens aperture is the size of the opening in your lens - wider apertures let in MORE light and will therefore increase your shutter speed. Wide lens apertures are represented by small numbers like f/3.5 or f/2.8.

The ISO setting determines how fast your sensor absorbs light. Higher ISO settings mean that the sensor is absorbing light FASTER which increases your shutter speed (but a high ISO setting will also introduce noise into your photos).

So - what's the best way to maximize image quality and also ensure that your subjects turn out nice and sharp?

Once you find the right settings for aperture, shutter speed and ISO, then you can fire away without having to adjust settings any further.

Not all lenses have the same widest aperture value - also called the maximum aperture of the lens.

For example, some people following the steps above may find that they can only get their aperture as wide as f/4 while others will be able to go all the way to f/2.8.

The maximum aperture of most kit lenses is f/3.5.

Let's say that you've diligently followed the steps above using a lens with a max aperture of f/4. You've found that even at ISO 6400 (which is quite grainy) you're shutter speed still isn't fast enough.

I hate to say it, but in this case your only option is to purchase a different lens with a wider maximum aperture.

For example, most kit lenses have a variable max aperture that ranges from f/3.5 to f/5.6. The max aperture is based on the focal length of the lens:

What do you do if your lens has a variable maximum aperture? Follow the same steps as above, but:

The reason for this is simple: if your shutter speed is fast enough at the narrower aperture setting, then it will only get FASTER when the aperture of the lens gets wider. By matching your shutter speed to the more narrow aperture, you're ensuring that you can zoom in and out without having to adjust your camera settings at all.

Image stabilization (whether in your camera or lens) is of no use for this situation.

This is because image stabilization only helps to stabilize CAMERA motion. It's great if you want to use slow shutter speeds and your subject is not moving around.

But if your subject IS in motion, the only thing that's going to capture a clear image is a fast shutter speed.

Notes: In image #1 the shutter speed is much too slow - the entire image is one big blur. 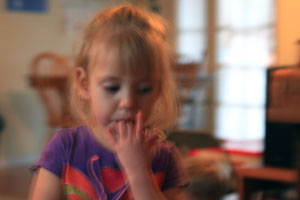 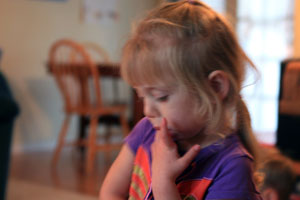 Notes: Taking the ISO up to 1600 gets me a useable 1/80th of second, enough to get a clear shot of my daughter but only because she's standing fairly still. 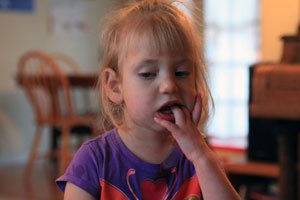 I request tip ideas on the Digital SLR Guide's Facebook page - if you'd like to suggest ideas for this newsletter, then become a fan. 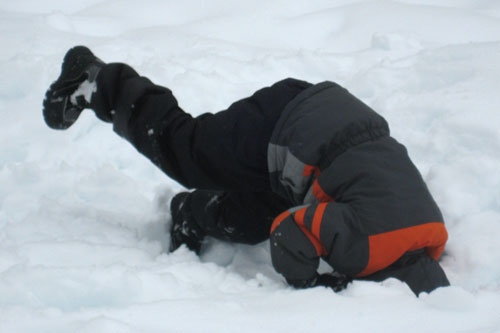 For once, I can't take credit for an image in this newsletter - the one above was captured by my wife during a recent trip to the snow.

This was about the third time that my son had seen snow and the previous two times were pretty disastrous - about 5 minutes out in the cold air and he decided that he'd rather just sit in the car.

This time I think that he finally appreciated how much fun romping in the snow can be - or perhaps he was finally warm enough to have a good time.

After a couple of runs down the hill on the sled, he decided that he'd rather dig a hole in the snow. And then, in one of those odd moments that can only happen with a young child, he tried sticking his head in the hole he'd just dug.

I think that he was pretending to be an ostrich.

Whatever the reason, my wife was there to capture it with the camera, and this illustrates a good point about digital photography in general: you never know WHEN a spontaneous photo opportunity will present itself.

Part of the reason why professional photographers are able to capture those once-in-a-lifetime moments is because they are ALWAYS carrying a camera.

If you're willing to tote yours around more often, chances are you're going to see some amazing things that you can preserve forever with a photo.

I've come to the conclusion that I need a way to dictate to my computer and have it type for me - there's just too much to write down right now and not enough time to do it.

Despite the flurry of news surrounding PMA, I've been making great progress on the next set of Digital SLR Lessons. I've got all 5 lessons pretty much written, but now I need to go back and add in a LOT of sample photos.

An illness in February made me lose a week of time, so I'm not sure if the lessons will be 100% done by the end of next month (that was my original goal) but if not you can definitely expect them to be available in April.

Once those are done, I'll get some new cameras in my hands so that I can post some more in-depth guides.